It’s not normally considered a risky sport, considering there is no physical contact.

But badminton players should always wear safety goggles to play because they could end up blind, researchers have warned.

Flying shuttlecocks and the racquets of fellow sportsmen can cause injury that needs surgery and even blindness.

And those that play doubles are particularly at ‘high risk’ of a serious eye injury than singles players, the experts said.

There are no rules imposing protective eye wear, and professional players suggest it should remain that way because injury is so rare. 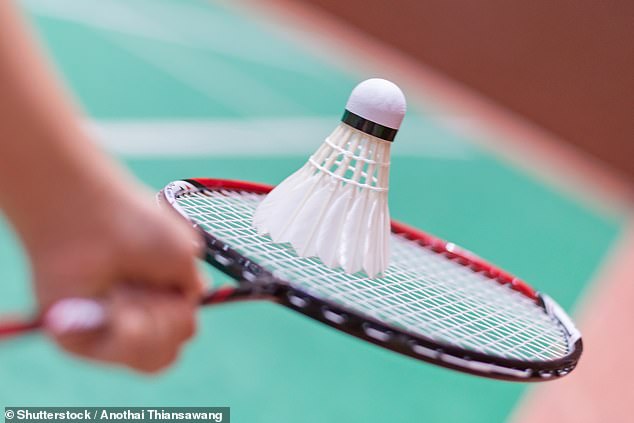 Badminton players should always wear safety goggles to play because they could end up blind, researchers in Beijing have warned

The researchers, at Capital Medical University, Beijing, added that people with impaired sight shouldn’t play at all.

Dr Yi Liu, study co-author, said: ‘Use of protective eye wear is highly recommended, based on expert professional guidance, safety education and awareness of the ocular injuries that can occur.

‘Over the past 40 years, it has been repeatedly reported that none of those injured were wearing protective eyewear while playing badminton, and we report the same experience.’

Shuttlecocks impose a danger because they are small and dense and usually travel at high speed, and in close proximity to players.

Dr Liu and the team gathered information from 52 men and 33 women, who had sustained an eye injury during a badminton match in the six years between 2011 and 2017.

The study participants were aged between 15 and 65, and had been playing badminton for an average of seven years. None were professionals.

In five of the total cases, the injury was penetrating which is considered a ‘trauma’ that can cause permanent vision loss.

In one case, the victim became blind in the injured eye, according to the paper published online by the British Journal of Sports Medicine.

WHY IS A SHUTTLECOCK SO DANGEROUS?

Badminton has been classified as a high risk sport for ocular injuries by Sports Medicine Australia due to the small, dense shuttlecock that travels at such high speed in close proximity to players.

The impact of the shuttlecock depends on the distance from the player hitting the shot.

Because of their aerodynamics, badminton shuttlecocks move quickly, and severe blunt eye injuries occur when the distance between players is small.

Players may turn to face their doubles partner and be hit by a shuttlecock at close proximity.

It is much less known that badminton shuttlecocks can cause significant permanent vision loss compared to tennis balls, according to a Canadian study published in the Canadian Journal of Ophthalmology in 2017.

Dr Liu said: ‘Assessment of injury type showed that 58 were hyphaema, where blood collects in the front chamber of the eye, and 36 of these had progressed to secondary glaucoma.

‘In 23 cases, the lens had partially dislocated and the injury caused retinal detachment in a further two cases; 26 people required surgery for their injuries.’

The player had been hit by a shuttlecock in 60 of the cases, while a racquet had caused the injury in the other 25.

While shuttlecocks caused most of the total injuries, the researchers found that racquet injuries were more severe.

They had produced enough force to knock over the player, break their glasses, or even rupture their eyeball.

Most of the injuries had arisen in doubles matches (73 cases) with only ten arising in singles matches.

In well over half the cases (52), the doubles partner had caused the injury, when the other player had turned towards them while hitting a shot; in 31 cases, an opponent was responsible.

And in countries where it is widely played, such as China, the researchers are concerned that badminton causes a ‘substantial’ proportion of sports-related eye injuries.

For example, badminton is popular in Southeast Asia and is therefore the leading cause of sports related ocular injuries.

In Malaysia, where badminton has been played for many years, the sport accounts for two thirds of all ocular sports injuries.

But there are no known guidelines that make protective eyewear a necessity.

Only the Ontario Badminton Association mandated protective eyewear for all junior players and recommended eye protection for all badminton players in 2005.

Half of the injured study participants weren’t aware that badminton could be regarded as a ‘high risk’ sport because of its association with eye injury.

The findings prompted the researchers to make several recommendations, including advising people not to play badminton who already have impaired eyesight, only one functioning eye, who are recovering from surgery, or who have already had eye surgery or eye disease.

Lee Clapham, an ex England badminton player and qualified Coach with the Badminton Association of England, told MailOnline imposing rules are not necessary, especially among professionals.

He said: ‘I’ve had a few people that have had eye injuries, the majority from a shuttlecock.

‘It tends to be the club players, amateurs or juniors who are not as competent on the court. It would be a freak accident if it were to occur at top level.’

Although some people have previously tried to push for recommendations – particularly parents – Mr Clapham said it’s not justified.

He said: ‘Unfortunately it’s one of those things where there isn’t enough injuries to justify it, especially in the professional end.

‘The percentage is so small so restrictions would only be possibly necessary at a beginner level.’